Home In the News The Top 50 Schools For International Students 2019: Foreign Enrollment Is Slowing, But It’s Not All Trump

The Top 50 Schools For International Students 2019: Foreign Enrollment Is Slowing, But It’s Not All Trump

The Davis International Center is the main hub for foreign students at Princeton University, the No. 1 School for International Students. PRINCETON UNIVERSITY, DAVIS INTERNATIONAL CENTER, SAMEER A. KHAN/FOTOBUDDY (2018)

With all the border-closing rhetoric that’s come from the White House over the past two years, it’s little surprise that the United States’ international student population growth is stagnating. Though America still hosts over a million foreign learners, first-time international undergraduates in the U.S. sank 6.6% in 2017 according to the IIE, a nonprofit that tracks international exchange in education.

Yet despite its timing, the slowdown isn’t totally a Trump side effect.

“There’s definitely merit [to that argument], but this is not the only factor,” says Marcelo Barros, founder of international student career counseling firm International Advantage.

“The trend started years ago,” says Rajika Bhandari, a strategy advisor at the IIE. “The flow of new international students is beginning to soften.”

In 2016, students at American colleges paid an average annual net tuition of $8,202 at public schools and $21,189 at private ones, according to Student Loan Hero, a subsidiary of Lending Tree. That figure is often higher for international students, who don’t typically get generous aid packages.

Both sums are astronomical compared with those of most other countries; the U.S. has the second-highest tuition rates among nations with top-ranked schools (the U.K. tops the list). The average tuition in South Korea, which has sent fewer students to the U.S. every year since 2012, is less than $8,500 at private colleges and less than $5,000 at public ones. In China, America’s top supplier of international students, students can attend public college for between $3,000 and $10,000.

Some nations extend their affordable rates to non-citizens. German colleges have typically been tuition-free for international students, though the state of Baden-Württemberg started charging non-EU students $3,400 a year in 2017—still a bargain compared with American peers. Tuition for international students in France will similarly nudge up to $3,200 a year starting in the autumn of 2019.

To help pay, some foreign governments invest in scholarship programs that promote international study. Between 2011 and 2016, the Brazilian government funded yearlong study programs in STEM fields in the U.S. as part of its Scientific Mobility Program, which was part of a larger initiative to send 100,000 students abroad. In Saudi Arabia, the nearly 15-year-old King Abdullah Scholarship Program has spent billions of dollars annually to send students to U.S. colleges and universities.

But both programs have recently cut back. In 2016, Saudi Arabia heightened restrictions on the King Abdullah program, limiting the pool of American schools to which it would send students. In the 2016-17 school year, 14% fewer Saudi students came to study in the U.S. than in the previous year. The end of Brazil’s Scientific Mobility Program in 2016 was followed by a 45% drop in Brazilian students studying in the U.S. between the 2014-15 and 2016-17 school years, though numbers rebounded 12% in 2017.

Cutbacks from important feeder nations have big effects on international student population growth. Saudi Arabia and Brazil are the fourth- and tenth-highest sources of international students who come to the United States, respectively. There were almost 25,000 fewer students from the two nations combined in 2017-18 than there were in 2014-15. 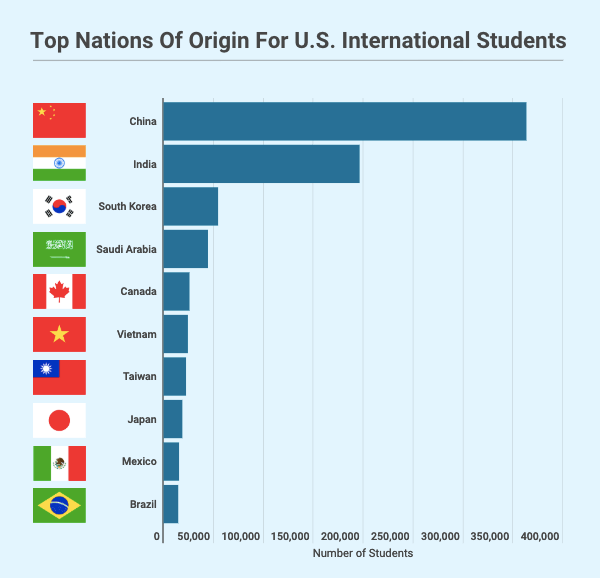 External factors notwithstanding, most reputable schools are getting better at helping international students earn their diplomas. Between 2007 and 2017, the average graduation rate for international students increased almost six percentage points to 76.8% at the 293 schools considered for our list (all schools on the Top Colleges list with sufficient data whose undergraduate body is at least 5% international). That tops those schools’ average rate of 75% for all undergraduates.

Yet beyond basic metrics gathered by the federal government like graduation and enrollment trends, applicants looking to invest in an American education don’t have much data on which to base their decisions. Admissions experts in the space aren’t aware of any extensive databases that tackle topics like international student financial aid or alumni salary. And while some schools do keep these numbers, international applicants are sometimes so caught up in a college’s reputation that they eschew the more important questions about its ROI.

“International students should find out from universities their resources that they have available to help them achieve their job search goals,” says Barros, “and specifically obtain US employment placement data from the degree program they’re interested in, if they want to stay in the U.S.”

Here is the full list of the 2019 Top Schools for International Students: