Home In the News How Has Trump Affected International Students’ Job Search? 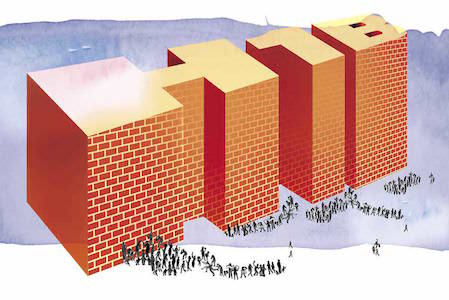 It’s been almost 120 days since Donald Trump took office and nearly as long since Trump’s first of two (failed) executive orders on immigration. Since then, international students have been understandably anxious about where they stand under an “America First” Trump administration. And so, to find out what’s going on with the H1-B visa program, what international students have to fear or cheer under Trump, and what, if anything, these students should be doing differently if they want to work in the U.S. upon graduation, we again spoke with international student career expert Marcelo Barros. Below is an excerpt from that conversation.

VAULT: Do we know what Trump’s views are on the H1-B program? If so, what are they? And have any significant changes been made to the program by the Trump administration that significantly affects international students?

BARROS: Trump isn’t a fan of the H-1B program, so many people find it hard to believe there haven’t been any significant changes made to the program. The H-1B visa eligibility hasn’t changed. The number of available H1-B visas also remains the same. In other words, it’s business as usual, and this is particularly true for international business students. But when I tell international students this, many have this puzzled look on their faces, and some ask me, “Are you sure, Marcelo?” That said, international students might need to calm employers down, particularly mid-sized firms or firms without much experience with international hires. Many of the firms we talk to, for example, now seem to believe that before they hire an international student, they have to prove there aren’t any qualified Americans available. But that’s not the case! And this is only one of a few dangerous misconceptions currently floating around about the H1-B program which can hurt the chances of international students getting hired.

VAULT: Even though nothing’s changed yet, isn’t it true the Trump administration has said it plans to heavily scrutinize the H1-B program going forward?

BARROS: Yes, that’s correct. The White House has asked the Departments of Homeland Security, Justice, Labor, and State to take a look at the H-1B program and propose modifications that might strengthen it. The current administration seems to be trying to find out if there are any loopholes in the program that might have led to abuse or fraud in the past. I completely support this directive from the White House, by the way. In the past, the Department of Labor has collected invaluable data about the H1-B program and is in an excellent position to provide the White House with valuable historical information about which companies and industry sectors have used the program, the most commonly used job titles, the pay grade of H1-B employees, etc.

VAULT: Is it fair to expect tighter H1-B regulations in the future? If so, how would that affect international students who want to work in the U.S. after graduation?

BARROS: Not necessarily. No one knows what will end up happening. I’m not operating with the mindset that H1-B rules could become less international student-friendly in the future. When I speak with international students and university personnel, I usually say there’s little, if any, value in trying to anticipate what might happen. I try not to engage in these types of conversations with students, in particular, because they don’t help them get hired. I’m obviously very concerned about the future of the H1-B program and have utilized proper channels, such as reaching out to a couple of senators, to voice my concerns. Those concerned about the future of the H1-B program can also work through their congressman to make their voices heard. This kind of effort is extremely valid. I believe that the best use of our time is for us to be proactive and try to shape the future of the H1-B. I believe our international students would appreciate if universities took proactive steps to make their voices heard in the H1-B debate. A more H-1B employer-friendly program would make it easier for international students to get hired.

VAULT: This year was the first time in five years that the number of H1-B applications dropped. Can you talk about the most recent H1-B visa season?

VAULT: Has your message to international students who want to work in the U.S. changed since Trump took office?

BARROS: That’s a question I’m often asked by university personnel I partner with. In short, the answer is “no.” To date, I haven’t seen anything that’s caused me to consider changing the way we provide job search training for international students. That said, the need for international students to be mindful of the current climate we’re going through has never been greater. They should be prepared to train harder than ever. For example, when international students find themselves in trouble and contact me for job search help, they often ask me to review their resumes. But that’s not what I’m interested in. A question I ask is, ‘What does your typical day look like?’ If someone says, ‘I get up at 6, hit the gym, go to class, go to my job, complete group projects, do my homework until 11, and connect with 10 new people every day on LinkedIn,’ then that student has a chance. In general, the strategies that international students can use to secure U.S. employment haven’t dramatically changed since Trump took office.

VAULT: Still, international students must be anxious with “America First” Trump in office, and many internationals must believe that getting a job and/or keeping a job in the U.S. will at some point, if it’s up to Trump, become more difficult. So what’s your main message to them?

BARROS: My message is that President’s Trump “Hire American, Buy American” views don’t change the fact that there aren’t enough U.S. citizens interested in pursuing advanced studies in sciences and engineering to keep up with the demand from U.S. employers who can’t fill certain jobs. Speaking specifically about our international business students, many will continue to secure great roles in quasi-technical jobs that make full use of the strong technical and analytical foundations they developed prior to coming to the U.S. And that’s only one of several ways for international students to be successful and get hired.