Home In the News How Do U.S. Schools Help International Students Launch Their Futures?

How Do U.S. Schools Help International Students Launch Their Futures? 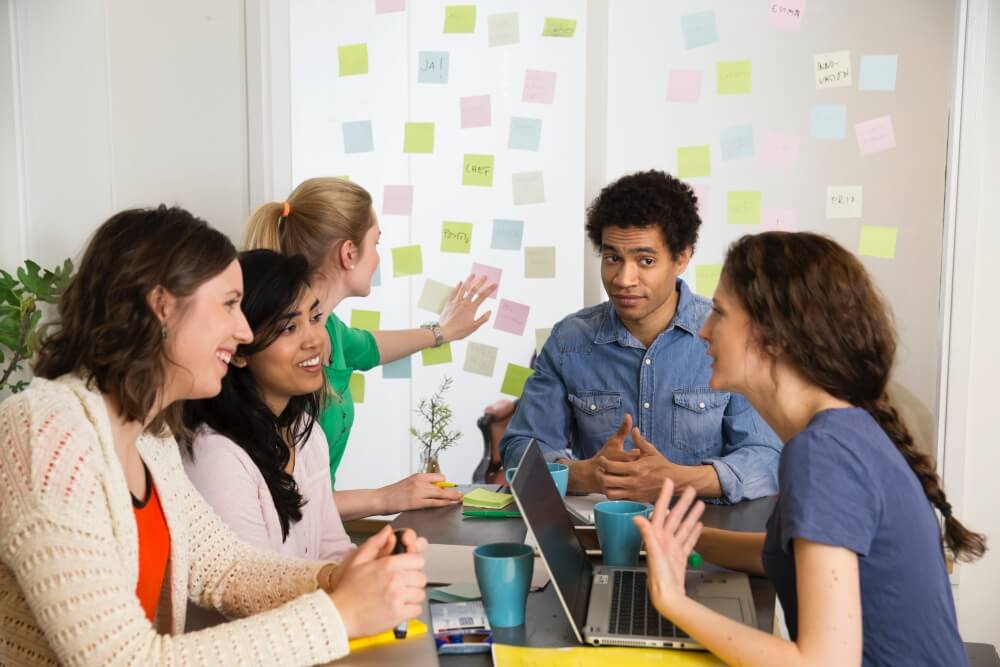 Regina Ye comes by her entrepreneurial spirit naturally. Her parents, both entrepreneurs in China, modeled it for her when she was a child. Curious, creative, and well-traveled, Ye has long brimmed with different ideas. Thanks to her studies at Mount Holyoke College in South Hadley, Mass., she’s on the brink of seeing one of those ideas become a startup.

In the fall of her junior year, Ye took a course called “Entrepreneurship: Idea to Prototype,” as part of Mount Holyoke’s new interdisciplinary minor, Entrepreneurship, Organizations, and Society (EOS). The course aimed to help students launch a startup with limited resources, and teach them to be market- and customer-focused, according to Rick Feldman, a lecturer in economics and entrepreneurship coordinator for EOS. Feldman, who was Ye’s instructor, guided her as she developed her concept: a travel-friendly case for beauty products.

While Ye conducted market research and tailored the product design, she discovered her target demographic to be professionals who travel for work. After she finished the course, she pursued an independent study with Feldman, refining her travel case, and learning more about business and entrepreneurship. At Feldman’s urging, Ye participated in local pitch competitions. They helped her get involved in the startup community, and meet new mentors and friends. That led to her acceptance in a summer-accelerator program, which allowed her to work on her product full-time and move toward launching it.

On Nov. 1, Ye, now a senior, launched her ZIRUI Go Case on Kickstarter. It’s an all-or-nothing bid—the project will be funded only if it meets a $20,000 goal by Dec. 8. “It has been such a fulfilling ride, and I don’t think it would’ve been possible without Mount Holyoke’s support and encouragement to pursue not one, but all of my interests,” Ye wrote in a blog post. Though she’s open to staying in the United States after graduation, that’s not her primary focus. Her goal is to be an entrepreneur, and head up ZIRUI. The country where she’s based will be secondary.

Like Mount Holyoke, other U.S. colleges and universities recognize the importance of international students, in their contributions to diversity, the economy and beyond. Schools go to great lengths not just to recruit them, but to help them succeed in the American job market. By doing so, they can help their international enrollment management at the same time.

Likewise, international students recognize the value of a U.S.-based higher education. An October 2017 report from World Education Services says a vast majority of both current international students and alumni believe their U.S. education was a good investment. Overall, the report found, alumni employment outcomes are good: a large majority had job offers within six months of graduation. But some areas, such as salaries, need improvement.

Still, the climate for international graduates is trickier than ever, amid recent government restrictions on travel and employment, which complicate challenges they already face. But some schools are committed to helping them get to work.

New International Enrollments: Cause for Concern?

Regina Ye is among the more than 1 million international students enrolled in U.S. higher education. That’s a record number, according to the latest Open Doors report, released Nov. 13. But the number of new international students—those enrolled here for the first time in fall 2016—fell 3 percent from the previous year. It marks the first drop in the 12 years since Open Doors has reported new enrollments.

Higher-ed officials and experts say the decline might be partly due to international students’ hesitation about the U.S. political climate. But Allen Kenneth Schaidle, an education consultant and researcher, said it reflects competition from abroad. For instance, he said most federal universities in nations within the Gulf Cooperation Council, such as Saudi Arabia and the United Arab Emirates, offer free tuition for their national citizens. “So the incentive is high. They are free and high-caliber academic institutions,” Schaidle said.

He also mentioned emerging global markets like Shanghai, Dubai, Nairobi and Bangkok as lucrative to international students. If they can obtain a reputable education and a degree from schools within these markets, they will, “because they are realizing the U.S. and U.K. markets are becoming saturated, and emerging markets are catching up,” Schaidle explained.

Tim Kao, director of International Student and Scholar Services at the University of Dayton in Ohio, said that recently there’s been greater government scrutiny on H-1B visas and Optional Practical Training. Kao said he and his colleagues across the country are hearing about slower processing times and more requests for evidence.

“We’re seeing and hearing that more. For the H-1B in particular … the administration has asked for more scrutiny. In our office we’re a little bit worried about that. It’s still early in the game, but there are rumors about international students saying, ‘The U.S. isn’t as hospitable as we thought, in terms of being able to work post-graduation,’” Kao said. “People are slowly starting to question if the U.S. is the best place to study, and they will consider other countries. People will still keep coming here. But maybe the numbers will go down.”

At the University of Dayton, Collaboration is Key

Fall 2017 enrollment at the University of Dayton shows that internationals account for 11 percent of all students. Kao said that translates to 1,200 students, down from two years ago when international enrollments peaked at 2,000. Among the school’s draws are its 15-to-1 student-to-faculty ratio, and the high marks it earns for entrepreneurship studies: for 2018, the university’s undergraduate program is ranked 11th in an annual survey by The Princeton Review and Entrepreneur.

Dayton’s Center for International Programs and its career services office offer a variety of programs tailored to international students, such as: interview-skills workshops; panels with alumni who’ve successfully navigated job searches in the States; a hiring guide for students and employers; an international-student webpage and LinkedIn group; and a weekly newsletter. The two offices communicate and collaborate often, which benefits the students.

Kao pointed out, “There’s been a lot of talk about how colleges and universities are meeting the needs of international students. Much of that talk is centered around job placement. It’s a challenging area because international students often have a much bigger learning curve to surmount. This is why schools [that] do a better job at this, and can help place students at higher rates, will stand out.”

“It’s like a feedback system to evolve, so I don’t get stuck. I will have weekly sessions with my intern to talk about my strategy. He or she goes back and talks with friends, and with international associations on campus, so [the intern is] a conduit—a window both ways,” Witt said.

Nivedita Penugonda, who hails from southern India, is currently serving as the intern. Since starting her studies at Dayton toward a master’s degree in computer engineering, she’s been pleased with how much her skills have improved, and her knowledge base has expanded. After graduation, she’d like to stay and work in the States, for at least three years.

Penugonda informs as many of her peers as possible about what career services offer. She works with Indian, Saudi and Chinese groups on campus—not just telling them about career-related programs, but making sure they understand how they’d benefit, and urging them to participate. She also reviews student resumes and suggests improvements.

The biggest challenge international students face, Penugonda said, is adapting to U.S. culture and the English language. They crave community. When international and American students form friendships, they build community, bridge language, and cultural gaps, and everyone stands to gain, she said.

When a school succeeds in helping students from abroad launch careers here, it can be a boost for international enrollment management. As Witt said, “Simply put, word of mouth from current students back to prospective students in their home countries has a great effect on enrollment. The better the student support services, the more positive the student experience, [which] results in that added layer of promotion of a university.”

One thing Barros emphasizes is honoring the unique strengths international students bring, and tapping into them for the job search. Among those strengths are strong analytical, language, math and science skills. “There is a certain cognitive boost that these students have, because they are learning how to become multicultural individuals,” he said. “The multicultural brain is very powerful when appropriately developed, and my work is focused on getting them to focus on that.” If they learn to build their job searches based on their innate strengths, they’ll go much farther than they have historically, Barros believes.

Concordia College New York, one of Barros’s clients, centers its strategy to help international students on three areas: education, opportunity and service. John C. McLoughlin, Concordia’s senior director of enrollment, said they hire experts like Barros to educate international students about the best ways to conduct job searches. And the school hosts visits from an attorney, who speaks and answers questions about the legal and compliance sides of working in the United States.

The school offers international students opportunities to gain valuable work experiences, either paid or volunteer, where they develop skills that ultimately enhance their resumes. Concordia funds positions that pay students to work in various places on campus, for around 20 hours a week—for example, in admissions, marketing, as lab assistants, and in the nursing and biology departments. McLoughlin said these jobs are meant to give students a leg up during job interviews. “They can articulate how they work in an environment, engage in team work, what their style of work is. It gives them something more tangible, to be more competitive in a job search,” he explained.

Concordia also provides services that aim to make sure international students get a chance to interview with the right employers. The vocational planning office has career development counselors who help students get interviews. “But the extra step we take is, we hire folks who are comfortable and well-versed in international issues,” McLoughlin said.

Several international alums work in full-time positions on campus, helping with marketing, and advising students looking for employment. Meanwhile, the school has created a new position, director for global student programs, which will be primarily responsible for the career development of international students and employer relations.

McLoughlin believes the school’s approach has been effective. Overall international enrollment at Concordia has been climbing: it increased from 17 percent in fall 2016 to 24 percent in fall 2017. Though some students have expressed concern about the recent government restrictions on travel and employment, they’ve not been affected beyond general apprehension, McLoughlin said. Still, the school has assured its students from abroad of its protection and loyalty. In light of the restrictions, Concordia maintains a strategic mindset. It’s considering ways to stay committed to a global community, even if U.S. policies change.