Steven got his H-1B

What I find unique about Steven Akotia’s journey as an international student was his ability to treat non-U.S job leads with the same focus as he attacked U.S job leads. In the end, a marketable finance MBA profile coupled with persistence and luck allowed Steven to secure a great H-1B role with a firm that makes full use of his talents. Please meet Steven Akotia everyone, currently Business Analyst, M&A and Valuations at Laureate Education Inc. While I enjoyed my Q&A with Steven, I must confess that getting Steven to speak about himself does not come as easily for him as his ability to determine if a firm might be overpaying for an acquisition.

Marcelo: Why did you decide to come to college in the U.S?

Steven: I was looking for a cultural experience that went beyond just academics. I was also looking to not only improve my technical skills but also to develop my soft skills – leadership, networking skills, etc. MBA programs in the U.S are renowned for their holistic programs hence my choice.

Marcelo: What is your country known for? What’s the most interesting or funny question you received from someone during your studies in the U.S about where you are from?

Steven: Ghana is known as the most politically stable country in Africa – we have had peaceful political transitions numerous times. Our soccer team – the black stars – is also very famous. I was constantly asked during my studies how come my English was so good. A lot of people did not know that Ghana is a former British colony and that English is the national language.

Steven: I am not a natural networker and my cultural sensibilities exacerbated the problem. It took me some time as well as a lot of goofs and mistakes to get a bit more confortable with networking. However, with a lot of effort I was able to substantially improve my networking skills – I secured numerous interviews for full time roles due to networking. The most important thing is effort – the more time you spend honing your skills the better you become.

Marcelo: How’s it that you knew which roles and companies you wanted to target? Did you have a job search plan or a methodology you followed?

Steven: I had an idea of what I wanted to do and where I wanted to work. However, international students have to be very flexible with regards to looking for a job.

Steven: Very different. The model in the U.S is very relationship-based. Coaches work very closely with you to help assess your strengths, weaknesses, etc. It’s like a discovery process.

Steven: I worked with a global multinational and it was a good insight into American working culture. It was also the first time I participated in a super-day (which was very intense). It was a very valuable experience that helped in subsequent interviews. Overall, I believe a lot of employers are much more comfortable in hiring international students with some U.S work experience.

Steven: Interviewing in the U.S is very direct and more about the candidate’s personality and soft skills. Usually, there is a lot less emphasis on hard skills. The ability to describe in detail your past achievements is very crucial when interviewing in the U.S This is something I was not used to until I came to this country.

Marcelo: What’s the best part about being an international student, and what is the worst?

Steven: The best thing is that quite a lot of companies treasure the fact that you have a different perspective. The worst is overcoming cultural differences.

Steven: I typically did not reach out to companies I knew did not sponsor. I was very open to moving to another country if I did not secure my visa. I think it is important to be very open minded about moving out especially with the increasing uncertainty of securing the visa.

Marcelo: Tell us about your job. What is it that you really do?

Steven: I mainly work in the mergers and acquisitions space – running analysis on companies my organization wants to acquire or recently acquired. The interview process was typical super-day with rounds of case and behavioral interviews.

Marcelo: Americans talk a lot about “likeability” in the hiring world. Does such a concept exist in your country? Are international students at a disadvantage when it comes to likeability in your opinion?

Steven: The concept barely exists where I am from as most people are hired based on their technical skills. I also believe that international students are at a great disadvantage because most of us do not develop this “skill” back home, so we have some catching up to do when we move to the U.S.

Marcelo: What kinds of questions did your family ask you during your studies? Were they worried about whether or not you were going to find a job in the U.S after graduation?

Steven: My parents also had some part of their schooling outside my home country and so they mostly understood the system. My family was just as open-minded as I was about my job prospects post MBA. They understood the difficulty in securing a job in the US and encouraged me to be very accommodating in my job search.

Marcelo: What message do you want to send international students who are seeking jobs or worried about their careers? How can an international person be successful in the U.S in your opinion?

Steven: Be open-minded about roles, companies to work for, moving back home or even to a different country. Network as much as possible and do not be shy about reaching out. The response-rate might be 5% but you need just one person to give you a solid lead.

Marcelo: You’ve achieved what so many dream of. What is your international advantage?

Steven: Well, as an international student I was driven to succeed but also remained willing to go places most people did not want to. I think this was my international advantage: I treated the world as a playground, and tried to identify opportunities and companies that excited me, no matter where they were located. Yes, like many international students, my Plan A was to secure a job in the U.S, get started with OPT, and secure my H1-B. In the end, that is what happened to me. I feel very lucky and I love my current role and the company I work for. Nonetheless, during my job search, when I uncovered quality opportunities outside of the U.S, such as those in my home country, I pursued those aggressively. I was not casual about those leads. Many MBAs – both domestic and international – are focused on working for certain companies, and some even place a great deal of focus on their job titles. My strategy was the opposite: I was aware of my skill set, and where I could have an impact. I knew I would be a strong fit for some sort of role in the world of finance. I was open to see where my talents might take me. I think as international students we certainly have an edge when it comes to flexibility.

To learn more about how you can land a job in the U.S, pick up a copy of The International Advantage 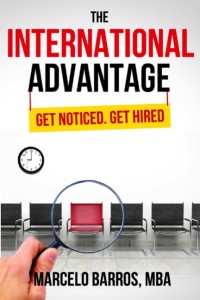